Accurate and timely information is crucial any time a problem arises. Don’t leave your customers in the dark or confused. During a flight home from out east I experienced both good and bad customer service, and there are some lessons to be learned. (I had another memorable experience at an airport. This one entailed great customer service, and I wrote about it here.) 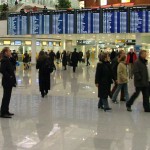 The trip started in Harrisburg, Pa. I was scheduled to take the 1:50 p.m. flight to Detroit (#3829). The flight was delayed more than two hours due to bad weather. (Our jet, inbound from somewhere, was diverted to Pittsburgh, where it waited out the storm.) So there we sat patiently at gate A1. At one point the sign was changed to read flight 3965 to Detroit, and listed the departure time of 4:35.

We were puzzled. Do we stay at gate A1? The Delta employee kept saying that our flight would leave from A1.

Around 4:00 an announcement came over the PA system that flight 3829 would be leaving from gate A3. Everyone headed over to A3. The sign there said that flight 3965 (4:35 departure “on time”) was leaving from there. Huh?

The woman at the counter said, no, flight 3829 is departing from A1. So we marched back to A1. The sign still read flight 3965. Perplexed, we decided to ignore the sign, and hang around.

There was no ticket agent at A1. Instead, some other gentleman was behind the counter. He was dressed like a baggage handler. I assumed he was pressed into duty to handle the situation there.

He deserves a lot of credit. Despite not being a customer service person, he remained calm (as did the passengers) and friendly, and helped passengers rebook as needed. Sensing that I might miss my 5:45 connection in Detroit, he booked a spot on the 8:00 flight as a back up. That proved to be prudent.

We started boarding from gate A1 around 4:30, and left soon afterward.

Looking back, it seems as if the left hand wasn’t quite sure what the right hand was doing. Turns out there were two Detroit-bound flights leaving, coincidentally, at about the same time: Ours, which was a 1:50 flight delayed due to weather, and the regularly scheduled 4:35 flight.

A lot of confusion could have been avoided had the employee at gate A1 merely changed his sign to read flight 3829, and updated us on occasion. He made no announcements the entire time we were at gate A1.

The “fun” continues in Detroit

Having arrived too late to catch the connecting flight in Detroit, I was so glad the Harrisburg worker had booked a spot on the 8:00 p.m. flight. I arrived at the appropriate gate well within the allotted time. As 8:00 approached, however, passengers could sense something was wrong. Sure enough, Delta announced that the jet had engine trouble. Technicians were analyzing the problem, and hoped to know “within 15 minutes” whether we’d be able to fly.

I asked about alternatives. The gate agent said there were no more direct flights to Milwaukee that evening. Great. Another round-about flight back home. She didn’t think there was another jet they could press into service. Passengers were told to stay near the gate for announcements.

Luckily I bumped into a frequent flyer who offered to let me hang out in the Delta lounge (nice place, by the way). Around 9:00 the announcement came that we would be flying out of gate A67. They had found another jet, thankfully. It was to depart in about 20 minutes, which meant hopping the tram for the long ride to the other gate.

We eventually took off, and I arrived in Milwaukee about three hours later than originally scheduled to. I was a bit tired, but otherwise no worse for the wear.

Make sure what you are stating is clear, and update your customers frequently. Even if there is little to report, say something so they know you’re still concerned about them and are trying to resolve the situation.