We’ve all heard businesses claim that their customer service goes “above and beyond” and “exceeds your expectations.” What do those mean? Does your firm offer great customer service, and if so, how do you know? 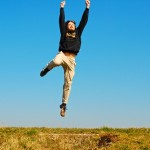 I was the recipient of great customer service one day several years ago, and I remain thankful to this day.

My adventure began as I arrived for a flight out of O’Hare International Airport in April 2008.

Sue, a friendly Apple Vacations representative, greeted me as I approached the USA3000 ticket counter. While chatting with her I realized that I was toting someone else’s luggage. Mine, it turns out, had been given to the other traveler as he exited the hotel’s courtesy van moments before.

Sue quickly sprung into action. She first called my hotel, only to learn that the van had returned. She retrieved the tourist’s name from the hotel, and learned from me that he was flying on Spirit Airlines. (This is one good reason to chat with your van mates during that predawn ride to the airport!)

Sue — in between checking in other tourists — ran behind the counter to make additional calls. About 10 minutes later she returned with the news. The grounds crew was able to pull my luggage off the line and return it to the Spirit Airways counter. Plus, she was able to leave a message at Terminal 3 for the other traveler to return to Spirit Airlines. (Where he could pick up his back once I returned it.)

Sue said I could take the tram, which boarded nearby. I was concerned about getting back to the ticket counter in time. Sue said that worst case, my luggage would be sent on the next day’s flight. (This was a charter flight.)

What should I do? I asked. I needed to get to Terminal 3, and then back to Terminal 5. “I can’t make that decision for you,” she replied. (Understand the predicament she was in.)

I froze. I could see my vacation getting off to a horrible start. I was paralyzed, unable to move. The clock above me continued to tick away. Sue could see the fear in me. That’s when her human instincts kicked in.

I headed for the escalator that would take me to the tram gate. Hopping aboard, I waited impatiently as the train chugged its way slowly to the economy lot. (It was outbound at the time.)

We eventually arrived at Terminal 3. My strategy was simple: Up the escalator, to the ticket counter, grab my bag, then back to the tram. All, I hoped, in time to catch the train heading out to Terminal 5.

As I was racing to the escalator, I looked up to see the other tourist standing there holding my luggage. We quickly swapped bags, and I hopped aboard an outbound tram.

A day that could’ve been a disaster instead turned out quite well. All because a customer service person took the initiative, then stepped outside the rules box a bit to issue an important directive. (That doesn’t require much on your part, as I explain in another blog column.) By exhibiting good customer service skills she saved more than my day–she enhanced the reputation of Apple Vacations, as well.

If asked, I’m sure Sue would say she was just doing her job. But it was far more than that. You see, offering good–no, great–customer service is not difficult. A little extra effort is often all that’s needed. Treat your customer with respect, and they will remain customers.

If you’ve had a good customer service experience, feel free to talk about it below. And if you enjoyed this column, could you do me a favor and share it with others? Thanks.