In an earlier post, I introduced you to amateur radio. Here I’d like to review the ham radio equipment I own.

How much and what type of ham radio equipment to buy is one of the great mysteries–some say pleasures–of becoming an amateur radio operator. With so many models of radios and antennas to choose from, not to mention all the accessories available, outfitting your “shack” (ham radio room) can seem like a daunting task.

It need not be. You can enjoy ham radio with a bare bones setup if you wish, or you can go all out. It’s totally up to you. (Within reason, of course. Budget, space constraints, and even building covenants also play a part.) Your Elmer or another experienced ham can help you in this area.

I own two sets of equipment: An HF base station with a multi-band vertical antenna, and a VHF mobile radio whose mag mount antenna permits operation indoors as well as in the car.

This picture shows some of my equipment. The radio is a Kenwood model 820 (circa 1980). The black box on top is a power supply for the power/SWR meter to its right. If you squint really hard you can make out the telegraph key just behind the microphone. It’s on a block of wood, which is the brown item. The pink sheets are pieces of scrap paper. I was operating during Field Day that year, and needed lots of scrap paper.

The antenna is a Butternut 6V (six-band vertical). Fully extended, it is 26′ tall. A true vertical antenna, it requires ground radials. (The grass has long since covered them up.) I laid down about 100 while I was installing the antenna. I suspect a number have broken over the years, but I should still have at least 80 working for me. 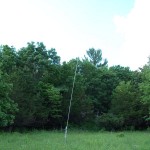 This arrangement allows me to work a number of HF (shortwave) bands without spending a lot of money or disrupting the natural beauty around our cabin. I realize that without a directional antenna or amplifier, I won’t be able to compete with the “big guns,” but that’s OK. I never have a problem finding someone to chat with.

I generally get good reports, although a lot depends on sun spot activity. As you may have heard, we’re approaching the peak of the next cycle. Band conditions are getting better, and should improve even more by early 2013.

I’ve worked a number of countries over the years, including France, Germany, Aruba, Hungary, Guatemala, and most recently, Bosnia.

Band conditions are improving, but I still spend a lot of time on 40 meters and 20 meters. However, I monitor 15 meters and 10 meters more, awaiting some great band openings. The 10 meter band, in particular, is really “hot” during the peak of the sun spot cycles. During the previous cycle, which occurred 2000-2001, I shortened the antenna about six inches to maximize its effectiveness on 15 meters  and 10 meters. Consequently, it became useless for 80 meters–it had a bandwidth of about 50 kHz anyway–so I wasn’t out anything. I didn’t operate much on 80 meters as it was.

Overall, I’m quite pleased with the Butternut, though it has a couple design quirks. The wire used for the 15 meter band is way up the antenna, requiring me to take down the antenna to adjust that part. Also, the antenna exhibits rather high SWR on 20 meters causing a drop in output on that band. I could lower that a bit with some adjusting (called tuning), but that would throw off performance on the 40 meter band. So I leave it as is.

Completing the arrangement is nearly 160′ of RG-8U coax.

For mobile operations I use a Radio Shack HTX-252 2 meter radio. A very basic model, it offers only standard voice operation. (No code or other modes you find on more advanced radios.) Its two power levels, 10W and 25W, are sufficient for hitting repeaters in most areas of the country. I use a 5/8 wave mag mount antenna mounted on the trunk.

To operate from inside the apartment–in essence, base operation–I had to buy a power supply. I also found some metal to act as a ground plane for the antenna. (The car body serves that purpose during mobile operations.) It’s a nifty operation, and allows me to chat with folks in the Milwaukee area via local repeaters.

What arrangement is best for you? Only you can determine that. Ask other amateur radio operators to show you their shacks, and ask for their advice. Putting together your ham radio station is a lot fun with the reward–making contacts over the air–the icing on the cake. Feel free to comment below, and please share this column with others. Thanks!

1 thought on “Ham radio equipment for base and mobile operation”